A Message From The WCC Executive Director

Let me start by saying we are grateful that you are part of the extended Whitin Community Center family and that we hope you and your family are safe and well.
It is nearly impossible to summarize what we have been through as an organization in the past year and a half as I am sure it is for all of you. However, we are resilient because of our team and all of you. Rather than focus on all the challenges, I want to talk about how we realized what it means to build a strong community.
It was made clear that our community depends on us. At the peak of the pandemic, parents entrusted us with their children. They trusted us to keep their children safe while they went back to work to provide essential services. Our amazing educators cared for the families and children as they transitioned from isolation, full remote, hybrid, and then back to in-person learning. We treated everyone with the care and respect we would give to our own families including personal phone calls to check in on our seniors. So many of our members and families in our care were so grateful to return to the WCC and shared how much they missed us.
Our community was there when we needed it the most. We could not have survived the past year without the support of our donors, partners, and neighbors including so many of you. The grants from foundations and state organizations were invaluable in enabling us to support our staff and the individuals and families in our care. Without the PPP loans, we would have had to lay people off. The donations from businesses and individuals like you enabled us to provide for people in need in our community through our Youth Outreach programs and scholarships.
Our community is counting on us to be here in the future. There is a youth mental health crisis going on in our community, region, state, and nation. We have children in our care, as young as elementary school, who have threatened suicide and self-harm. Over 40% of our students at the Rockdale Youth Center have diagnoses of anxiety or depression, that doesn’t include the many who are undiagnosed or the countless adults and seniors who are also suffering in our community. To provide a safe and healthy environment for everyone at the WCC, we must also improve our infrastructure and expand our programming. In less than 2 years, we will turn 100 years old.
Many have said that the WCC and its Blackstone Valley Children’s Place, Youth Outreach, and Camp Whitin staff and programs are gifts to the community. I couldn’t agree more. This is why we must continue to raise money.
Thank you for being there when we needed you the most. We ask for your continued support to be here in the future for the people who need us and to continue to make our whole community resilient – physically, mentally, and emotionally.
Sincerely,
Heather Elster
Executive Director
Read MorePlease Donate

Give The Gift Of Health!

Looking for the perfect gift?

Not sure what they want?

Give a WCC Gift Card!

They can be used toward any program! 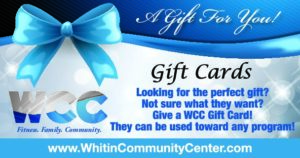 Whitin Park was filled with cheers and celebrations Saturday morning, but not because children were finding Easter eggs.

Instead, the Whitin Community Center held an Eggscrambler and hid letters across the park.

Seekers searched high and low for the hidden letters, keeping track of each find on a worksheet. They needed to find all nine letters to unscramble the secret word. The hidden letters spelled out jellybean.

The scavenger hunt was no match for Harrison Hutnak and his brother Benjamin, but the letter ‘E’ gave them a little trouble.

A single golden egg hid among the letters for a chance to win a special prize.

“There is only one and it’s very small,” said Castro.

The lucky winner was a four-year-old named Liam.

The event was a socially-distanced version of the annual Eggstravaganza Easter egg hunt. The Eggscrambler was the next best thing for both kids and parents.

“It’s a very safe activity, it’s outdoors. I’m not worried about being close with people. I just like to get them outdoors and tucker them out for nap time,” joked Laurie Hutnak, Harrison and Benjamin’s mother.

It was a popular Easter activity for families in the area. Castro said more than 45 families attended the event.

The money raised from the event will be donated to youth outreach programs at the Whitin Community Center.

Fitness, family, and community are the core values of the Whitin Community Center. To help locals partake in these values, the center has a variety of exercise programs, a multitude of events that help families and friends bond, and numerous community outreach programs. There’s always something exciting happening at the Whitin Community Center, and you can be a part of it right now!

Whether you want to volunteer, join as a member, or just pop by for one of the intriguing events listed on their monthly schedule, it’s easy to partake in the fun.

Exercise as a Priority

Exercise is one of the backbones of the Whitin Community Center. If you’re an avid exerciser or you’re just beginning to work back into shape, you can look to this accommodating facility for support, guidance, and quality facilities.

Both aerobics and aquatics are mixed into the weekly and monthly schedule. So if you want to join a class of your peers to get some guidance while also having fun, it’s easy to do so.

There’s also athletic opportunities like basketball and tennis, plus health and wellness education, personal training, and much more.

While the Whitin Community Center is a place where people come together to learn, exercise, and enjoy time with friends, the staff at this cherished local venue also goes out into the community to make a positive impact. Organizing food pantries and participating in town cleanups are two ways Whitin works to better the nearby community.

They also have some long-standing programs in place that you can become involved in right now, such as Camp Whitin, the Blackstone Valley Children’s Place Early Learning Center, and the Youth Outreach Program, which is free of charge for children ages 5 to 17. All of these programs work to create a fostering, inviting atmosphere where youngsters of all ages can come together, learn, and have fun while doing so!

Come by the Whitin Community Center to work out, get involved in the community, or just to see what this impactful facility is all about. Also, feel free to browse their various social media pages such as Twitter, Facebook, Instagram, and LinkedIn.

It has been our experience that satisfied parents are our best advertisers. Our way of recognizing your efforts on behalf of BVCP, will be $150 for every referral you make to us! Please refer to your Parent Handbook for more information. Or contact BVCP Director, Ginny Alicea at 508.234.8184 ext 105 or Ginny.Alicea@OurGym.org for more information.